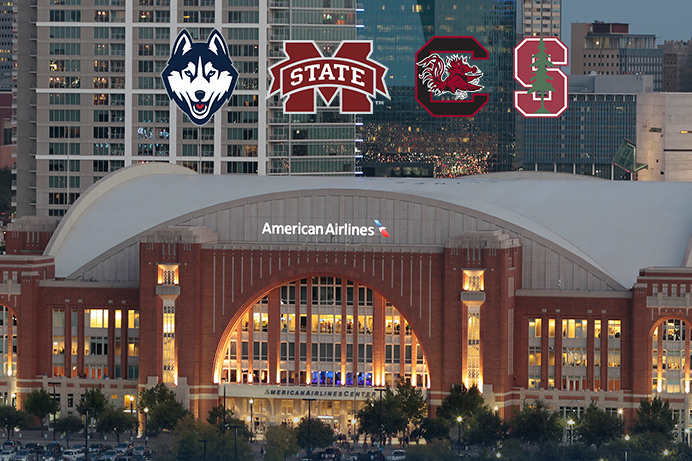 A champion will be crowned Sunday at the American Airlines Center, and each school has its own distinct story arc

Can UConn continue its domination of the sport, adding to its current 111-game winning streak and 11 national titles?

Mississippi State alum Dak Prescott authored one of the most improbable sports stories of the year in Big D. With No. 4 in the stands, can the Bulldogs muster the same kind of magic on the hardwood?

For just the 10th time in NCAA history, a school sends both its men’s and women’s programs to the final weekend. Will South Carolina join UConn as the only two ever to pull off winning both in the same season?

Buoyed by a thrilling win against No. 1 seed Notre Dame, Stanford is determined to make Tara VanDerveer’s 31st season as head coach one for the record books. Will VanDerveer square off against Geno Auriemma in a championship game matchup of two of the game’s all-time Mount Rushmore coaches?

Which of these plot points will end with confetti and net cutting? Answers are days away. The first Women’s Final Four ever held in Dallas will get started Friday night with two compelling semi-final matchups, both televised on ESPN2.

The action tips-off at 6:30 pm Friday night, when Stanford and South Carolina battle at American Airlines Center. Expectations are high for the SEC champion Gamecocks, who are making their second Final Four appearance in three years. Dawn Staley’s group upended Mississippi State in the conference title game to earn its third-straight conference crown and a No. 1 seed in the tourney. With speed, physicality and athleticism in abundance, they’ve averaged more than 30 wins a year for the last five seasons.

And don’t sleep on those Gamecock loyalists. The school has led the nation in attendance the last few years, and by a wide margin. Don’t be surprised to see plenty of garnet and black walking the streets of Dallas this weekend.

They’ll face a Stanford squad that’s proved elusive to the knockout punch. Down 16 in the second half to the Fighting Irish in the Regional Final, seniors Karlie Samuelson and Erica McCall rallied an offense that’s struggled at times, but held on for a 76-75 nail biter. This wasn’t an unusual outcome for the team from Palo Alto. It trailed Texas by nine a the half in the regional semis and has had to claw it’s way back in five of its last six outings. It’ll need to again rely on leading scorers Samuelson and McCall and playmaker Marta Sniezek if the Cardinal hopes to capture its first national championship since 1992.

The game could come down to the three-point arc, where Stanford took 115 more tries this season. If the threes fall, advantage Cardinal. But if South Carolina’s A’ja Wilson finds her rhythm in the paint, watch out. The Wooden Award finalist and first-team All-American can take over and if this becomes a game played in the paint, the Gamecocks have an excellent chance at finding their way to Sunday’s championship game.

On the surface, the second matchup of the evening (set for approximately 8:30 pm), UConn vs. Mississippi State, makes David vs. Goliath look like a pick ‘em. Geno Auriemma’s team is on a run unparalleled in the history of U.S. team sports. In addition to the aforementioned winning streak and national title count, UConn is gunning for its fifth-straight national championship and 11h in the last 18 years.

Junior Kia Nurse is the only UConn player with significant Final Four experience, and her leadership has shown. She has knocked down 20-of-26 three-pointers so far in the tournament. Couple that accuracy with the play making skills of Gabby Williams, and UConn offense is as efficient as ever. Factor in the inexperience of the Bulldogs, which will be making the program’s first ever appearance in the Final Four, and the fact the Huskies defeated them 98-38 in the Sweet Sixteen last year, and things don’t look good in Starksville.

Mississippi State is really good too. They are far more talented and experienced than that squad from a year ago. The Bulldogs set a school-record with 33 wins (and just 4 losses), were a No. 2 seed and have a defense that can pressure the ball and the rest of the court. They can also score in bunches. And they are big. Led by 6-5 Chinwe Okorie and 6-7 Teaira McCowan, they have the length needed to mix it up with Huskies. And Morgan William is a veteran point guard who can control the pace and limit mistakes. Her performance (41 points on 13-of-22 shooting, including six threes) against No. 1 seed Baylor in the Regional Final will go down as one of the all-time performances in tournament history.

Remember for every dynasty like John Wooden’s UCLA Bruins, there is a David Thompson and North Carolina State.

Does Mississippi State have what it takes to write that dramatic chapter in tournament lore?

Or will another of these teams author a storybook ending?

There will be no shortage of drama this weekend at the AAC. Let’s tip it off!